As part of efforts to address the shortage of agro-chemicals, the Ministry of Food and Agriculture (MoFA) has announced that the government was proactively working with local fertiliser producers to produce quality organic fertilisers on a large scale for farmers across the country.

According to the sector Minister, Dr. Owusu Afriyie Akoto, organic agriculture has taken a huge premium on the international market, adding that the mass production of quality organic fertiliser will make Ghana less dependent on inorganic fertiliser.

Dr. Afriyie Akoto was briefing journalists following a stakeholder meeting with local fertiliser producers on the production and promotion of quality organic fertilisers domestically in Accra on Tuesday, May 24, 2022. 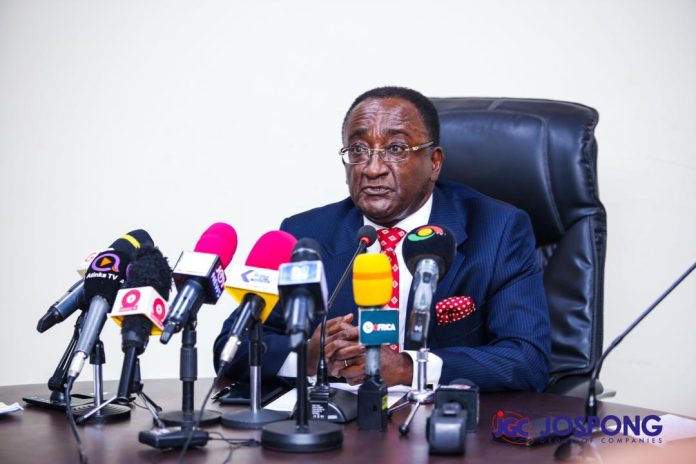 He attributed the ‘acute shortage’ of agro-chemicals generally, and fertilisers in particular, to the war between Russia and Ukraine, amid the international sanctions on Russia.

These developments, he said, were breaking the supply chain of fertiliser and making global trading very difficult which Ghana was no exception.

“In a catastrophic situation, you have to be able to adapt and come out stronger. So we feel that we need to encourage the production of quality organic fertiliser domestically,” he averred.

He noted that from January to May this year, there has been a sharp drop of the amount of fertilisers distributed to farmers in this country, and lamented that “that was nothing to write home about.

However, Dr. Afriyie Akoto believed that in the wake of the challenge above, a significant amount of organic fertiliser production was possible in the country.

“We will have a close collaboration with local producers of organic fertilisers to see how we maximise your businesses to help us bridge the fertiliser gap, if not completely, at least we make the effort to bridge a higher percentage of the fertiliser requirement,” he assured.

He urged the local organic ferrliser producers to avail themselves of the opportunities presented by the government to boost production to meet the fertiliser need of the farming population.

“We are prepared to work with you with our extension officers. We have the capacity in teaching the farmers on how to adopt and apply these organic fertilisers. And given the opportunity out there, I believe you can supply more,” he confidently said.

He also encouraged the local producers to convince their foreign partners to come and set up fertiliser plants in the country.

Furthermore, Dr. Afriyie Akoto indicated that Ghana was abound with loads of raw materials for fertilisation which included garbage and fauna.

He applauded the efforts of particularly Zoomlion Ghana Limited for investing hugely in using waste to produce organic fertilisers.

The demand for fertiliser in Ghana, he said, was about 600,000 metric tonnes.

…We are actively searching for solutions to ensure that farmers are supplied with the right chemicals,” he said.

According to the minister, the essence of the Planting for Food and Jobs (PFJ) is basically to grow farm productivity, especially on smallholder farms.

“And I believe we have been very successful with this programme in the last 5 years that I have been in charge of the ministry by targeting fertiliser and improved seeds for distribution to farmers,” he said.

He said the Russia-Ukraine war which has put asunder the global supply chain of fertiliser was “severely restricting” the PFJ programme and depriving more farmers of the benefit of modern technology of seed and fertiliser.

He said for the last three-four years, his outfit has had a “good extension” service, adding that this has led to a high subsidy by the government on fertiliser.

“At the peak of 2020, we had 1.6 million farmers on the programme which is only less than half of our farming population in Ghana. But it has had an impact in spite of all the attempts by our adversaries to put some dent on the achievements that this government has made in agriculture.

The Managing Director of Accra Compost and Recycling Plant (ACARP), Mr. Michael Padi Tuwor, who was present and spoke to the media on the sidelines of the meeting, described the engagement with the minister as “very fruitful.”

He indicated that as an investor he now has a clear understanding of the market, calling for more of such stakeholder engagements with MoFA.

Responding to the question of whether there was unhealthy competition amongst the industry players, he said: “We must always expect competition, and it must be a healthy one for the common good of the country.”

Again on the issue of fake products on the market, Mr Tuwor suggested that there should be a baseline or standard by which products must be required to meet before sent onto the market.

“When this is done it will help check imitations or fake products on the market,” he advised.

To this end, he encouraged stakeholders in the industry to work together to produce to meet the national fertiliser need of 600,000 metric tonnes.

Share it on:
Author: GREEN1-gro2
Dr Ken Okwae Fening who is a Crop Research Scientist and Lecturer at College of Agriculture in University
Read More 0
NEEM OIL Neem oil is extracted from the seed contained within the fruit of the neem tree. It
Read More 0
Home
Shop
Wishlist (0)
Login
Back to Top
× How can I help you?
Shopping Cart
Close

No products in the cart.